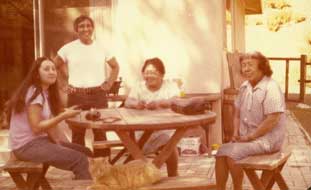 Dorothy Ramon was the last “pure” speaker of the Serrano language — the last person who thought, dreamed, and spoke first in Serrano, and then in English. Serrano once was spoken over a wide area of Southern California, including what are now parts of San Bernardino, Riverside and Los Angeles counties. But by the 1980s Serrano was reduced to the “pure” fluency of Ms. Ramon. Since the history and traditions of the Serrano people are contained in their language, the loss of the spoken word also meant the fragmenting and erosion of their culture. When she was in her eighties, Mrs. Ramon began working with a linguist, Eric Elliott. They worked together for more than 10 years and their work has been instrumental in saving the Serrano language. Read about Dorothy Ramon's life

After Mrs. Ramon died in 2002, friends, family members and other supporters decided to carry on her work and expand to include all of Southern California’s Indian cultures, languages, history, arts, and traditions. Led by Ernest H. Siva, who is Morongo Reservation tribal historian and cultural advisor (and also Mrs. Ramon’s nephew), members of Morongo and San Manuel reservations along with others from across Southern California united to form Dorothy Ramon Learning Center, Inc. This nonprofit, public-benefit corporation works to save and share Southern California’s endangered American Indian cultures, an important part of our national heritage. In addition, people from all walks of life and different ethnic backgrounds are joining to support the Nonprofit’s efforts through the Nonprofit’s associate membership program, called Heritage Keepers.

Dorothy Ramon Learning Center, Inc., and its publishing arm, Ushkana Press, honor the life and work of Dorothy Ramon, one woman who made a difference.