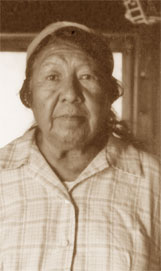 Dorothy Ramon: One woman who made a difference
By Ernest H. Siva
From Heritage Keepers newsletter Vol.1, Number 1, © 2004
My Aunt Dorothy Ramon was the youngest of a family of seven.
Her father, Pete Ramon, married Nancy Morongo, who was the daughter of Kiika' (traditional leader) Francisco Morongo. Both Juan Ramon, Pete’s father, and Pete served as the paxa' (ceremonial assistant) for Francisco when he held traditional feasts.
It was Francisco who reminded the people never to forget their language or their origin, even if they chose to follow the Younger Brother’s (White Man’s) way.
The three surviving sisters, Julia Horsman, Katherine Howard, and Dorothy, did just that. Each spoke their language fluently and instructed their children in the Serrano language. Dorothy did not have any children; however we became the recipients of her teachings. Later, this was greatly enhanced by her collaboration with Eric Elliott and the production of the book Wayta' Yawa' (Always Believe) (Available through www.malkimuseum.org).
This is monumental, because it has resulted in, literally, the saving of the Serrano language. Perhaps she was inspired in part by her grand aunt, the late Sarah Martin, daughter of Captain John Morongo. Mrs. Martin had worked with a number of ethnologists and linguists, which resulted in the production of a 1967 dissertation on the language by Kenneth Hill and a 1991 book compiled by Guy Mount. (Update: Ushkana Press has published a story in Serrano and English by Sarah Martin, The Road to Maarrenga': Serrano Memories of a Long-ago Ceremony at Mission Creek.)
Perhaps, because she was the youngest sister, Dorothy often appeared unassuming and shy, especially when it concerned outsiders.This changed when Michael Lerch, a friend and anthropologist, began inquiries into cultural and historical matters regarding the Serrano people. Both Katherine and Dorothy enjoyed Mr. Lerch’s young family. Mr. Lerch soon became knowledgeable of things Serrano. He has become an effective advocate for the Serrano people and their culture.
As Dorothy assumed elder status, her concern for the passing-on of important traditional knowledge, the “who we are, and where we came from,” became especially pressing. She made sure to tell us these things at every opportunity. There was always the expectation that there was something else to be told. It was at this time that she and Eric Elliott started their association. His tribute to her gives much insight about her at this time in her life. She truly was the last traditional Morongo.

Return to About Dorothy Ramon | Cultures